When the Torah Spoke in Spanish with Robert Altabet

“When the Torah Spoke in Spanish” with Robert Altabet

Meam Loez; The first Torah Commentary in a vernacular.

This Torah Anthology was initiated in Ladino in 1730 with the launch of commentary on Bereishit-Genesis by Isaac Kuli.

Ultimately, the entire Torah was completed according to Kuli’s plan over the 50 years following his death. This became a staple in every Sephardic Synagogue in the Ottoman Empire. In the 1960s it was translated into Hebrew and English. While it is an anthology of virtually every commentator on each verse and section, it also contains original insights by each of the 5 authors. Lecture will include historical context that prompted this popular work and will explore some of the Torah insights by the authors and by some of the lesser-known sources. RSVP for in-person or Zoom below. 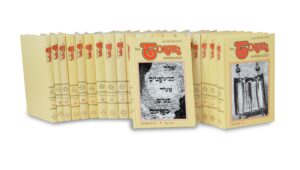