Hybrid Zoom and Meeting in the Temple Shaarei Shalom Sanctuary. Please note – no refreshments. Except Sefarad which will only be Zoom.

Back by popular demand, this film series examines the places in the world where wandering communities of Sephardic Jewry took root. Discussion about the films spans the broadest understanding of what constitutes Sephardic and Mizrahi culture. Each film viewing will be preceded by a short introduction and followed by a question and answer period, as time allows. Presented by Rose Pappo Allen and Robert Altabet 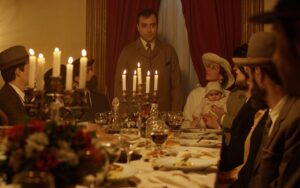 Sefarad; Jews of Portugal  A sweeping historical epic about hope, faith and humanity.  Based on the true story of World War I Portuguese veteran Barros Basto who rediscovers his Crypto-Jewish heritage and works to establish the modern Jewish community of Oporto in northern Portugal.

Saving the Iraqi Jewish Archive; A Journey of Identity This fourth film in a series about Iraq’s Jewish community, culture and history begins when 20,000 documents, religious books and personal artifacts were rescued in 2003 by U.S. soldiers from the basement of Saddam Hussein’s secret police headquarters in Baghdad.

After an arduous restoration process by the U.S. National Archives the collection risks being returned to Iraq and an uncertain future. Without access to the archives, the 2,700-year story of Iraq’s Jews is in danger of being lost.

Along with personal recollections, and historical context, the film includes interviews with representatives from B’nai B’rith International, JIMENA, a former Department of Defense official, the Conference of Presidents of Major American Jewish Organizations, Justice for Jews from Arab Countries, and the American Sephardi Federation/NYC.

Register in advance for the Zoom here:
After registering, you will receive a confirmation email containing information about joining the meeting.

ilm Trailer: The link will take you to Vimeo for viewing

Starting Over Again; A Jewish Egyptian Story  Filmed in Paris, Milan, New York, London, Washington, Sydney, Tel Aviv, and Jerusalem, this personal documentary is the story of Egyptian Jews during 1948-1956. Narrated by twenty witnesses, the film deftly weaves historical events and archival footage to create a powerful statement about resilience and reinvention.

Challah Rising in the Desert; The Jews of New Mexico A cinematic celebration of the history and people of New Mexico’s unique Jewish community. Five waves of Jewish settlement include Conversos escaping the Spanish Inquisition 400 years ago, German merchants on the Santa Fe Trail in the early 1800’s, international scientists at Los Alamos in the 1940’s and the counterculture of the 1960’s. A moving tapestry of the Jewish experience woven into New Mexico’s fascinating landscape and history.